Seven weeks ago the Mustafa family (not their real name) was escaping through a narrow corridor in a battle field, fired on by a Mig fighter and exploited by people smugglers….their story is one of survival…fighting against odds to cross the border alive. Now they have found refuge in Jordan at the Azraq camp.

We met Alla Mustafa when he called us over and invited us to his UN shelter to meet his family.

We were ushered inside to what was essentially a small versatile garage with UN monogrammed rugs covering the floors.

There, over a Turkish coffee brewed on a small gas cooker in the corner, he told his story.

The Mustafa family lived in what Alla described as a “poor” town. He installed insulation for a living and worked hard to support his family of six. His wife, three young sons and young daughter.

He was near tears at times as he recounted his tale. He said my questions about the escape and the lost lives of loved ones and friends were not insensitive…he was happy to answer them.

The town in which they lived was high up on a hill and was a vantage point the Government wanted to take. Following heavy shelling in the surrounding area the population of 10,000 was told by Government forces it had an hour and a half to leave through a humanitarian corridor in the surrounding battle.

“We left in seconds. After an hour and a half exactly, to the second, they would open fire. We had not time to pack, we left with the clothes on our backs. We could not drive, we were told to leave on foot.”

After this harrowing journey through the narrow corridor they were loaded into cars and forced to pay people smugglers to get them as close as possible to the Jordanian border. The journey was hazardous. At one stage they were fired upon with machine gun and rifle fire, injuring several in the party.

“But at least we had some money. Those who didn’t are still displaced within Syria. They cannot get to the border.”

The journey had other hazards and some died of thirst on the way as, “there was no water,” the smugglers provided no provisions.

Finally they were told to get out and walk the rest of the way. It was as far as the smugglers would take them. Over three days with few provisions they walked for a total of 24 hours across the rocky desert to the border.

Then, close to the border, terror struck again. “A plane swept down and fired on us.”

“It was a Mig…it fired rockets,” said his wife Jodee, looking up from preparing the coffee.

The family has many relatives still in Syria. “They are under siege at the moment.”

I apologise again for asking how the war had affected the family personally. How many had died who were close to them?  “Many,” he said, “many, many.”

“We had to make the trip to Jordan. The situation was too unsafe in Syria. Always shooting and shelling. We could not stay in Syria.”

When asked about his hopes for the future for his children he looked sad and responded “it is just a dream. Only God knows.”

He said they were happy to be in the camp. “Here we have safety and security. We missed this back home.”

We were accompanied on this tour by a member of the Jordanian police. It felt uncomfortable speaking to the Mustafa family in his presence. He was in plain clothes and I am uncertain if they knew he was a policeman.

I was careful with my questioning as I wanted to ensure the family was not unwittingly placed in a difficult position.

Elegant pictures by mugley Taken from flickr, under creative common. If you keep any of these pictures in your final website, please keep this credit too, thanks

Mohammad was an important man in Damascus. He worked organising President Assad’s political ceremonies, but this could not shield him or his family (two boys and two girls under 10) from the war and they have taken refuge in Zaatari after an odyssey across Syria to the Jordanian border. Sitting comfortably smoking from a shisha pipe on the porch in front of his caravan, he paints a vivid picture of life in Syria and the day that it fell apart. “I was coming back from my job when I saw bombing from outside my town (“Eastern Ghouta).” He tells how in the chaos he abandoned his car and travelled 30km on foot to reach his family. “I tried to call (home) frantically from the road. But there was no connection.” He describes a scene of disarray, shooting and bombing inside his neighbourhood. “I got into the town – I couldn’t see anyone. They had all left. “I tried to find my home. All the roads were blocked. “After walking I had to crawl on my knees (to escape gun fire). “A neighbour’s dog showed me the way through the rubble to my family, it got shot dead.” On crawling through smoking rubble into his home Mohammad found his family alive, terrified sitting in middle of house reading the Koran. The roof to the home had been destroyed in the bombardment. Now dark, Mohammad got his family to a neighbour’s car. “The driver of the car was in a crazy hurry.” He tells how a helicopter opened fire on the car, as it was the only vehicle moving on the streets. “ but we survived.” Following their escape, the family stayed in a neighbouring town for seven days before the Syrian Regular Army entered the town and began arresting people. Again fleeing to safety, Mohammad took his family to live with a tribe of Bedouin in the desert. There they stayed for four months, before the Syrian Regular Army shot at the camp, so again they moved on. This time to an area in Eastern Ghotua that was controlled by the Free Syrian Army, where members of their extended family also lived. They found an abandoned home that had been partially destroyed by an aerial attack and stayed in the house for about a year, while the children attended Free Syrian Army run schools in the town. It was a happier time. Mohammad then tenses as he tells of an aerial attack on the school by regime planes. The attack happened at 1pm in the afternoon and the school was full of children and teachers. His children were lucky and got out amongst the explosions and shrapnel. “The children were terrified. Survived but were horrified. The children were crying a lot.” He says three children and two teachers died in the attack. Following the air strike the town was under siege. There were many bombardments and the family survived on just one meal a day. “I couldn’t eat because I had to give food to my children. In the end I could hardly walk.” In desperation they sold their last remaining property – his wife’s wedding ring and used it to bribe their way out of the town. “We had to go to the regular army for permission to get outside the town – they didn’t help anyone – only if your bribe them. “My wife’s rings were the last things we had. “Soldiers threw bread on the gravel to the children to eat like animals because they are hungry.” The family hastily travelled to the Jordanian border and soon arrived at Zaatari. Mohammad says the camp is a safe haven. “In Eastern Ghouta people don’t look like real people – they are skeletons from the hunger. “Even the animals suffer, cows, horses, nothing to eat, starving. “Children when they get food suffer – stomach cramps because they are not used to eating.” Mohammad has surrounded his caravan with a garden as he tries to recreate a sense of home. He says he is ashamed to be in the camp. He is a proud man and this is not the life he wants for his wife and children. 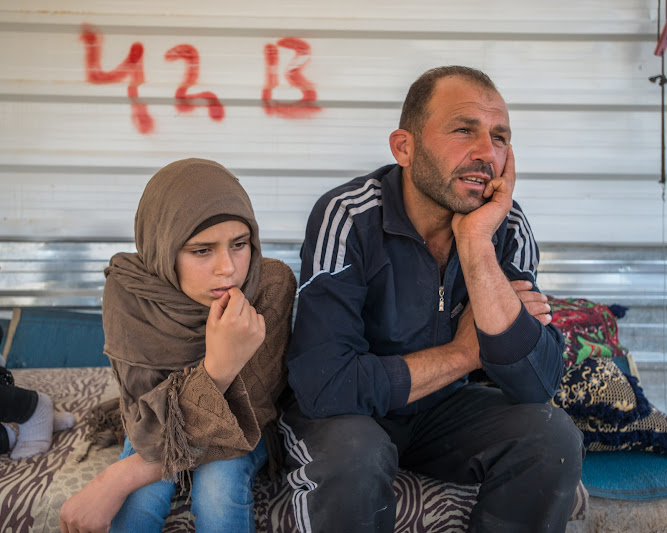