One of the first people to invite us to her home was an elderly woman and matriarch to a large extended family, named Fathia Almmar.

We crowd into her UNHCR tent and it is excruciatingly hot inside. The extended family of 15 packs around us and we sit there together discussing the camp. Soon some neighbours join us to tell their tales as well.

Fathia sits there holding court along with her neighbour, Hendria Alwadi, as they recount stories of horror about their lives in Syria and escape.

I asked how they escaped and Fathia mimics crawling across the tent. They crawled in the night under fire.

They made the decision to leave after the town in which they lived, Neymar in Dara’a, ran out of food. “There was nothing to eat. My son was dead in the war”…killed fighting for the Free Syrian Army against Assad. There had been many deaths among her neighbours.

They crossed the desert under enemy aerial fire, making the 30km journey on foot.

Her neighbour Hendria joins in the conversation. She is dressed in heavy black hijab and has an ornate tribal tattoo on her left hand. She had been well off in Syria and is living in a nearby tent with her husband, who is very unwell.

She too is from Dara’a and had fled with her husband when the Syrian Regular Army arrived. “The army came into our city and started killing the people there. Beheading them.” This, she said, was just before Ramadan last year.

“After that they started with bombings,” she gestures making a bombing noise.

“We left. My brother is dead. I still have five sons in Syria.” Two of these are fighting in the Free Syrian Army.

“Yesterday I cried all night because I had heard bad news about the army.” Her eyes well up with tears and she starts to cry.

“But we want to go home to Syria. We want it to be safe. This life here is not good. Living in the sand. The tents fill up with water when it rains. It makes the children sick. Snakes come into the tents at night and bite you,” she again demonstrates. “They bite the children when they sleep. Food is expensive here,” she demonstrates removing her rings to pay for food in the market. 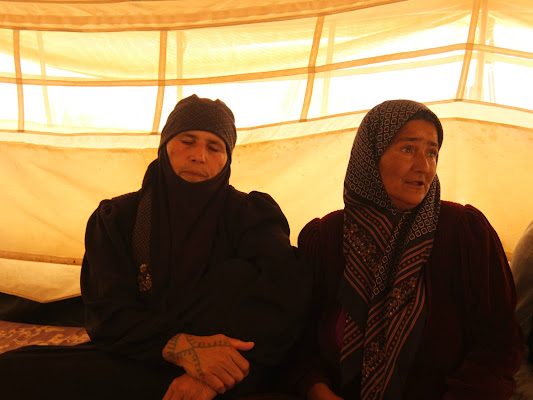 We accompanied UNHCR staff on a home visit to the family. They were there to assess them for additional financial support.

Samer met us on the street and directed us through a narrow alley way. We parked the conspicuous white UN Pajero four wheel drive before following on foot up a steep set of stairs through a high sided, rubbish laden, maze of alleys to his home.

I was taken back, when following his invitation, going inside. The “apartment” was a spartan series of small concrete cell like rooms and the only furniture squabs on the floor. In the corner sat a small colour television.

Our UN media guide told me the apartment was “average for refugees.” “It was upsetting,” she said.

In Syria he was an agricultural engineer. His home was 200sq meters on a small olive grove.

They had fled from Homs to Jordan, crossing the border illegally after traversing the rocky dessert on foot, a dangerous six day journey with little food or water. They arrived with the clothes they were wearing and $30jd, about $60Aust.

They fled to escape the aerial bombardment. “Many friends and my wife’s parents had been killed in the fighting. If they want to kill one person, they don’t care if they kill 1000 to get that one person.”

After first abandoning their home they moved quickly from town to town trying to keep ahead of the military onslaught. Finally they found themselves close enough to the border to make the six day dash on foot.

“I thought we would just stay in Jordan for ten days, until things settled down. We have now been here more than a year,” Sammer said.

“It is nicer than the first one we have had. Our first night in Amman was spent under a bridge. Our first house was just zinc roofing with a toilet (a hole in the floor) in the kitchen.”

On first arriving in Jordan, the family spent a month in Zaatari. “I prefer living in Amman. We like it better than the camp,” he said.

Samer hopes one day to return to Syria. “It is very bad now. Worse than when we came here. But it can’t continue. In two years it must be settled. We want to return home.”

He despairs of the situation at home. “Every day it is getting worse. Now local people are starting to fight each other. It is worst than ever.

“When a bread winner loses his wife and his children, he has nothing to do but to get engaged with those groups and to start fighting. If it was me I would do the same.”

Urban refugees need a permit to work in Jordan. They are forced to work under the table and this exposes them to exploitation.

“When I arrived here I worked in a clothes shop. Then they became scared of the Labour Ministry and told me not to come back. They did not pay me my last month’s pay ($200jd).

Samer’s wife sat quietly at his side throughout the interview, before disappearing to bring us a small Turkish coffee each. The coffee was strong, bitter and it was humbling to be their guests. The children were excited to see us. Aysha (5) had been burnt in an accident in the kitchen and the scars were visible and painful looking.

In Jordan they have access to education and health care. “We feel secure here,” Samer said. 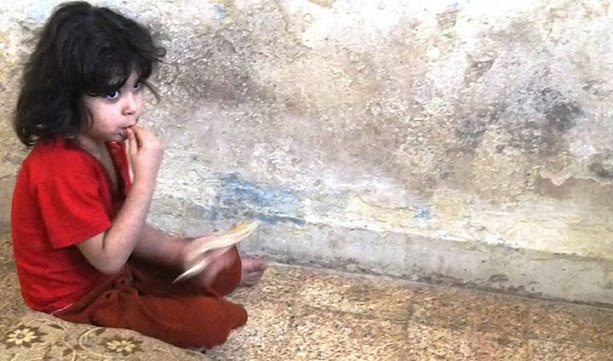 Typical of the stories told by refugees in Zaatari was that of the Fattl Alnzame family.

Like many, their decision to leave Syria was made after the destruction of the family home in an air raid.

On the journey out, they faced more aerial bombings and “many dangers” as the extended family of 12 travelled by car across Syria, from Dara’a. It is a name that keeps featuring as the home of many of the people we speak too.

He was a driver in Syria and not a “wealthy man.”

Mohammad and his extended family of 12 now live between two small “caravans” His is a floorless aluminium shed with tattered oriental rugs covering the ground. The family sit around us as we are served small glasses of bitter coffee.

Life in the camp is tough and Mohammad does not always feel safe. “Sometimes” he said with a shrug, when asked if the camp was a secure place for his family. “Not safe, not all the time”

He would like his family to have the opportunity to leave the camp to travel to another country. “Where,” I ask. “Anywhere,” he replied. “Here (the camp) is like a prison. There is no future for our children because we do not have permission to go out.”

As we prepare to leave the small caravan he tells me off for drinking my coffee too slowly. “Like this one (mouthful),” he says laughing.

A group of men, seeing us in the street, took us to meet a local leader, Mr Abo Adel. We sat with him in his walled court yard enjoying first a bitter coffee drunk in a traditional welcome and then hot sweet black tea.

He is a real character - appears to be in his fifties and is friendly yet formidable.

Like others he left the violence and lack of food in Syria and made a dangerous journey through the desert to Jordan, having paid Bedouin tribesman $30,000 Syrian to take him to the border. He says it was winter and cold and icy.

“We had to cross a river and some on the journey left their children behind on the road with local families.”

“When we arrived we were given one blanket. We asked for more, but just one.” He points to a thin woollen blanket.

“We lived in tents and it was very cold.”  Later he sold a property in Syria and purchased a caravan.

He tells us that he has been interviewed by most international TV networks in his time in the camp.

He says he wants to return to Syria as soon as it is safe. The camp is not his new home as some media organisations have suggested.

“When Syria is safe you will visit and we will have a Chivas (whiskey),” he laughs and moves forward to give me a high five.

Later he takes us to visit the mosque, but not before showing us his small herb garden, filled with horse radish, spring onion and parsley.

The corrugated iron mosque is cool inside and peaceful. We felt very honoured to have been invited in.

Our interpreter turned to me and asks if it feels like a church? “All prophets are from God,” she said.